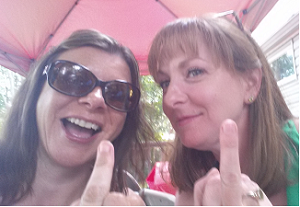 So I am going to deviate from the journey of Forty Times Platinum to talk about something personal. Another purpose of this blog is to make people interested in me (without a sex-tape). If someone is interested in me, then (in theory) they would want to read my book(s).

I’ll start with where I originally thought, I would end this story. Most of you know I am a designer (by day) for a Senior Living company. Last Wednesday I was at one of my communities with an art installer, when I came upon a resident circling around in a panic. “Help me!” she cried out. She couldn’t find her room. Thankfully she knew her room number. That’s not always the case. So of course I stopped what I was doing to help her. What heartless person wouldn’t? Of course the art installer just took out her phone and let me walk off with the resident. Hmmm.

Anyway, I found her room, the door was open, THANKFULLY. And she was so appreciative, saying, “God Bless You!” over and over. I walked back to the heartless art consultant (did I say that out loud?), thinking I just earned some points.

Well I was wrong.

Twenty four hours later, I’m sitting in horrific traffic driving to a facility in Pennsylvania. God Bless Me? That’s ironic, considering, I was heading to a town called, Bethlehem. What should have taken (according to the GPS), two and a half hours, took four hours. I was rushing to meet a drapery installer and when I got there, I was told he cancelled and was coming the following day. (Hint, that means I had to go back the following day as well)

When my fury subsided, I took a breath. I was also doing a furniture delivery that evening at five pm. So it was only say, five or six hours of my time, completely wasted. God Bless Me? Okay. The installers arrived right on time. They were nice and understanding that we were working on a dining room and that we needed to wait for the residents to finish eating. They almost seemed a little TOO understanding.

Seven hours later…. As if they were all going to turn into pumpkins, or they were all getting paid to work until midnight regardless of how long this was SUPPOSED to take, poof they were done. Did I mention, the night before I only got three hours sleep? And in two, one and a half hour increments? God Bless Me.

So it’s technically 9/11. Not that that means anything other than the irony of the date. The installers are long gone with their three massive trucks. It had been raining most of the day and mercifully, had stopped during most of their delivery, but as I was leaving the rain starting coming down again. It would be too cliché to say I didn’t have an umbrella- I did. Still, I wobbled out into the parking lot and into the new misting rain. I dumped my bags into my car and… click click click. The car doesn’t start. God Bless Me??

So yes, of course I made it back to New York the following evening. And I am still waiting for my blessing.