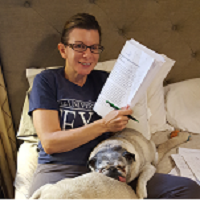 This post is directed to other writers out there.

We’ve all heard the expression, “Kill your darlings.” Like many of you I was appalled to hear such a thing, only because I felt it wasn’t explained in the right context to me at first. I thought I was being told to take the best lines of my book out. We all have them. That little nugget that you know no one’s ever written or read before.

A better way to think of it is, don’t keep something in your book just because of a little darling. I’ve been guilty of that in the editing processes. Keeping something that just doesn’t fit because it was written so well.

One thing I’ve found while writing and now editing two manuscripts, is that little darlings, the isolated ones probably can be used somewhere else. Every round of editing for me, includes several darlings or string of darlings that I review to see if I can use elsewhere. And usually I find a home for them.

But what about entire chapters!

I’m in the third draft phase of my new novel, “The Cougar Cruise” and something had been bugging me about the first chapter. Today, you have to define your novel in the first five pages. I think fondly of the book “Captain Corelli’s Mandolin”, where I was told, “Just get past the first hundred pages.” Only writers today know what has happened in publishing and how so many books we all love would never be published today, based on the new criteria.

Gone are the days, where you can let the reader get to know your main characters, and grow into the story. And then reveal the plot.

Well, just yesterday morning I stripped away the first chapter of “The Cougar Cruise” and made my second chapter my first chapter. Who cares if the first chapter introduced you to my main character properly, let you get to know her, like her, feel for her, savor her, understand her motivation. Sorry. Because that book won’t sell.

However, I am pleased with the new draft and how the book now begins. New authors have to be conformists. But that whole darn chapter was a darling. It really showcased my writing (I thought). But this is the world we live in people. Gotta have it now.

If you want to be a test reader for “The Cougar Cruise”, subscribe to the site and send me a message.