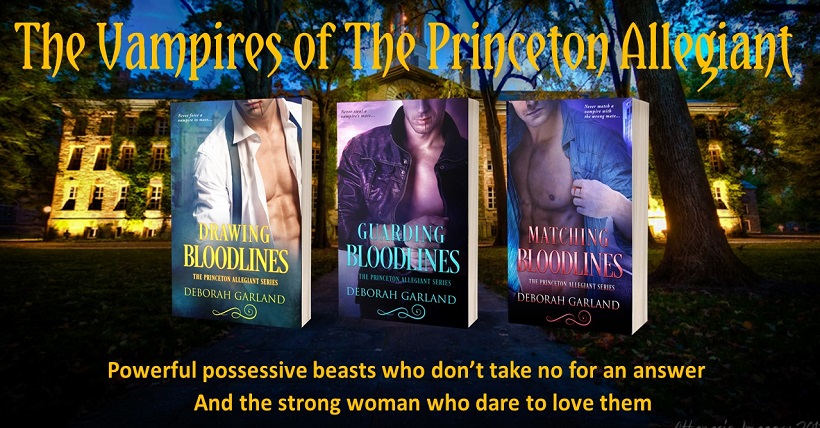 That title isn’t missing a word. In my vampire novels, the terminology my vampires use often is, I am vampire. It’s a verbal cue in the novels too. As a human comes to term with becoming a vampire, they drop the a.

Paranormal Romance authors have the best job in the world. Contemporary Romance offers a broad range of situations the average person would never find themselves in, and that stretch grows more and more every day, as authors compete for readers’ attention. No matter how the CR explains a character’s motivations and makes the setting as plausible as possible (as a CR author, as well as a writer of PNR, I know!), there’s always the risk of being so completely unrealistic that it distracts from your romance.

PNR authors, by contract, can just make shit up. Sorry for the expletive. But it’s true. And make it up, they do! The level of creativity I’ve seen is mind-boggling. And my hat is off those authors.

When I decided to dip my toe in the PNR world, I played it safe. With vampires. Sounds like a contradiction, right? Perhaps it came from the popular wave vampires had been on at the time, Twilight, TruBlood (Sookie Stackhouse Novels), the Argeneau series, and of course the Black Dagger Brotherhood vampires. I’m embarrassed to admit I’ve not read Anne Rice. But I didn’t need to. Vampire authors don’t have a set playbook they have to follow. That being said, I felt there were a basic set of vampire anatomy rules I needed to follow to make my vampires relatable. Okay, that’s not the right word. Familiar, is a better word choice.

Back to the creativity thing, I wanted to concentrate more on the world in which my vampires existed and how they interact with not just themselves, but with humans. How they were organized. Who they obeyed. Who their leaders obeyed. There’s always a chain of command. So while I organized what I called the Allegiant World, I let my vampires be ‘classic’ vampires. As ‘classic’ as one could imagine.

My vampire series, The Princeton Allegiant, currently has three books published. With six total planned. It was vital for me to introduce my vampires and what they could do in book one, Drawing Bloodlines. Just as the first chapter of a book is difficult for an author, book 1 in a series is hard, too. There’s a lot to accomplish. Facts to convey. Backstories to tell. Motivations to reveal. Expectations to set.

Drawing Bloodlines set the baseline for the entire series. While also introducing the reader to the types of vampires that exist in my world. Maybe that’s boring. It was also my very first PNR. Drawing Bloodlines took me nearly two years to write. It went through many edits and changes. The Allegiant World developed more and more with every draft.

PNR authors also get away with letting the subplots take the wheel. But the R in PNR is ‘romance.’ It’s what distinguishes a book from Urban Fantasy. In PNR, the romance has to be the primary motivation for the characters, while fighting off enemies. In UF, the author doesn’t have to promise or deliver a happy ending for their main characters.

First and foremost, each of my Princeton Allegiant books are romances. Each book features a different couple fighting for their happily ever after, against all odds, usually a world that wants to keep them apart.

The first half of Drawing Bloodlines had to accomplish a lot. It had to introduce my version of vampires and the world in which they exist and the rules they follow. Oh, and the main characters in that book! I open my series with Dr. Alexander Manning, single-mother, Elizabeth Lockspier. Alex and Elizabeth fight their attraction to each other, while balancing their other loyalties. For Alexander, it’s to his Prime Direction: stay hidden. In my vampire books, vampires are a secret. For Elizabeth, her first loyalty, of course, is to her daughter. Part of the character growth for Alexander, ‘an all-consuming beast’ is to let the woman he wants to possess put someone above him. For Elizabeth, it’s to trust, well, a vampire, and his troublemaker friends and let them all into her life.

I had not intended for Drawing Bloodlines to be a series, to be honest. It was supposed to be a one-and-done. Then somewhere in my edits, I introduced a vampire that changed everything. I took my own rules and everything I thought I knew about my vampires and turned it upside down. Wait, that’s not true. The character did that. All authors can point to a character who lands on your page and just takes over. For me, that was Loren Tagaris. (Pronounced Law-ren, like short for Lorenzo)

I admit to being ‘inspired’ by the vampires in many other books, as far as what they can and cannot do. Loren is the only vampire with magical powers. In most vampire books, vamps have some kind of additional ability that goes beyond speed and strength. Mind-reading, mind-control, disappearing and reappearing, moving objects, setting objects on fire, etc. Loren can do it all. I threw the kitchen sink at this guy.

He’s Grindewald, Dumbledore, Magneto, Charles Xavier, Superman, Spiderman, etc, all wrapped up into one. Maybe not Antman, though. Can you say, ‘off-the-wall’?

A vampire that powerful, however, was a challenge because every character needs a weakness. My vampires are already fairly indestructible. It’s their oath of secrecy and their fear of discovery by humans that keeps most of them in line. Loren is no different. He’s been shunned because he’s so feared. And that loneliness has grated on him. He also understands that vampires need to be controlled by leaders. Every vampire must bend the knee to a commander (or be considered a rogue) and every commander reports to the controlling Lords. Every vampire except Loren. But he knows while the allegiant system is not perfect, it’s better than nothing. So he’s bound to their laws because he knows vampires won’t win a war against humans.

For me, instead of reinventing the wheel and educating a reader on a unique combination of characteristics for my vampires, I went classic. Familiar. I wanted the world to be the draw and the inner turmoil of the allegiant system and how it’s on the brink of war.

So why Princeton, some readers have asked me. In short, I was working on a design project in Princeton, New Jersey, when most of my ideas for this book came to me. Attacked me really. The sleepy university town seemed like the perfect gothic setting for mysterious hidden vampires to walk among humans, who only see them as tall and breathtakingly beautiful. Luring women who are strong and brave enough to take them into their bed, where they are ravenous and insatiable lovers.

Oh yeah, I wasn’t leaving those details out.

In April, Drawing Bloodlines, Book One of the Princeton Allegiant was released.

The TBR Pile said, “it’s sure to heat your blood.

The Romance Reviews was “drawn into this new paranormal vampire world.”

InD’tale Magazine said, it was “unique” and “quite engaging.”

NEVER FORCE A VAMPIRE TO MATE… The Paranormal Romance Guild gave it 5 stars from , saying it’s “non-stop excitement until the end.”

In just a few days, Book 3, Matching Bloodlines will be released.

NEVER MATCH A VAMPIRE WITH THE WRONG MATE…