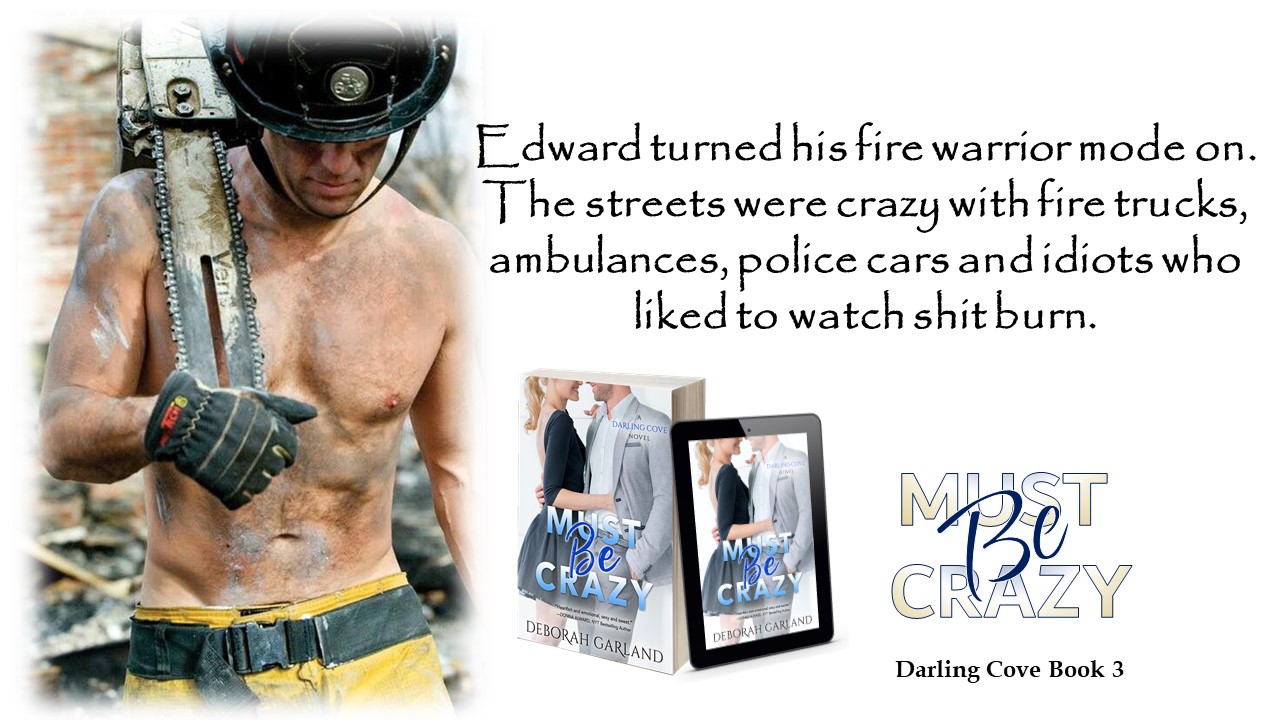 Seeing Skye yesterday, being with her, touching her, and almost… “Jules, let’s go to the field. Grab your bike,” he shouted from his bedroom.

He stood there, naked, until he roughly pulled on a pair of shorts. He was so tightly wound that he needed to burn the muscles in his legs to stop the pain in his heart. Wipe out the thought he possibly had already lost his Skye. She was his, damn it.

In the parking lot, he yanked his son’s bike out of the car and carried it to the steps that led to the running track. He had no patience to wait for little legs. The sooner his anger burned off, he would be a better father.

“Okay. Be careful.” Edward secured Julian’s helmet and after a slight wobble, the boy took off on his bike.

The sun had dipped behind the trees, but it was still warm. He checked his watch and set the timer. His best run time was a five-minute mile. That was in competition. Training was about building endurance and keeping the muscles fueled. Edward wasn’t training right now. He wanted to race, compete. Get in that mode. Push himself. Punish himself.

The field would be taken hard. Today would be about speed. With Jules part way down the track, he took off. Fast. The gravel crunched under his feet and he whizzed by his son in a matter of seconds.

His chest tightened, but he pushed himself to go faster. After he pulled off his tee-shirt and clutched it in his fist, he did two more rotations with no intention of stopping or even slowing down. When he rounded the loop, he saw the Golden Retriever. Casey. Skye stepped in a moment later. Fuck!

She took another step, looked his way and her body slacked.

Edward sped up and passed her. “Don’t leave because of me,” he muttered, and kept going.

Turning his head slightly, he saw Casey gallop across the field toward Julian. Having learned his lesson, he got off his bike and ran toward the dog. In the center, he greeted Casey where they nuzzled and played. Running back and forth, Julian waved a small branch he had found on the way. The dog chased happily and didn’t jump or get too rough. Skye had trained the dog well. Edward relaxed and kept running.

Skye pushed off and started her run. They were on opposite ends of the field, like two points of a protractor, each circling and making their own angles. Edward was faster and would catch up to her. He wanted to tackle her. Pull her down on the grass, get on top of her.

Shit… Erections and running weren’t a good combination. This was gonna get downright painful, Edward grunted to himself.

The delightful giggle of Jules and the dog was now behind him. It tugged at his gut that he couldn’t watch, but with Skye on the other side, she could see them. That small amount of comfort eased him for a moment. Still, he wanted to pass her. Be near her. Smell her. Have her see him. Maybe she’ll see what this was doing to him. How crazy he was.

His legs burned as his brain pushed him to that end. His jaw tightened; achieving a speed beyond racing. This was close to flying. Skye maintained a leisurely pace making Edward jealous, as hell. Why was she not as wound up as him? When he finally burst past her, he kept his body as close as he could without touching her.

She released a yelp, surprised by the express train that had just rocketed by. Edward pulled his head around to give her a look, that stern face he used in competition. Chase me. Catch me. If you can. I dare you.

Only, this time he wanted to be caught.